By default, Windows 11 has a lot less applications running behind the scenes than Windows 10. Windows 11 has a new resource allocation algorithm, which allows the system to better prioritize applications in the foreground. These improvements allow Windows 11 to easily offer higher fps and lower battery consumption.
Windows 11 also uses DirectStorage. This ensures that data is decompressed directly in the GPU. This results in slower loading times, higher frame rates and lower battery consumption. Windows 10 does not have DirectStorage.

Both versions include multitasking features as in the Android Operating System and touch based functionalities. Windows 11 also has a new snap layouts function, which allows you to display multiple applications in different sizes on the screen.
Windows 11 is more focused on Mac OS and Linux Desktop functionalities where Windows 10 is focused on Android functionalities. With Windows 11, the aesthetics of the desktop and the interface have been adjusted accordingly. Functions have also been added, such as an interactive UI.
The taskbar is also different in Windows 11, making it easier for using touch-based devices. Widgets have also been added, which help to make the desktop according to your needs.
With Windows 11, Microsoft Teams is installed automatically. Microsoft Teams is extremely easy to use. In the taskbar there is the possibility to quickly send messages, sound or video recordings to friends and contacts.

With Windows 11, new features and applications have been added, some have also been removed. Microsoft Teams is installed by default with Windows 11, not with Windows 10. Windows 11 also includes additional functions that connect to this. Microsoft Teams is the replacement for Skype, which is not standard in Windows 11. It can be installed separately.
What is also no longer in Windows 11 is Timeline. Timeline ensures that applications and documents are put in chronological order. However, this was little used and has therefore been removed. Cortana is no longer included as standard. 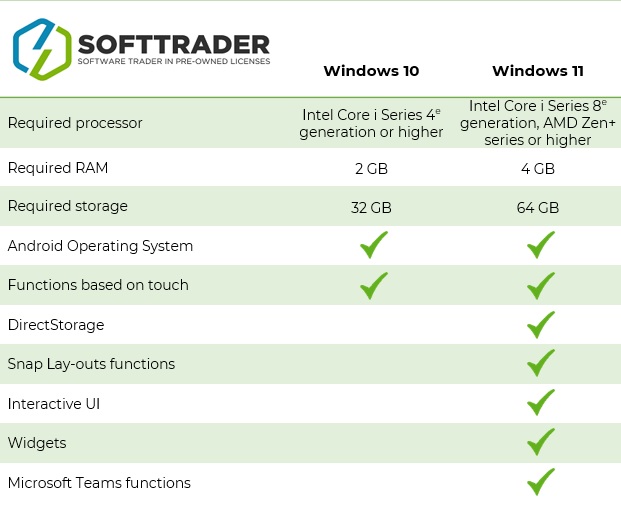 Which version is most suitable differs per situation. If you want the latest of the latest and want to minimize the chance of problems, then the latest version is of course recommended. If you want to have the software on a specific type of computer, it also depends on the required processor, for example. Both versions work great, but in general Windows 11 will perform just a bit better and be easier to use than Windows 10.

For more information about which Microsoft software and licenses are best for you, please contact us. We are available from Monday to Friday from 9 a.m. to 5 p.m.

Glad to hear! We would love to inform you even more about our products. Already convinced? Request a quote!